The sewer project on 9800-9900 blocks of SW 168th Street, and 16300-16800 blocks of SW 99th Avenue has to be the worst conducted and administered public project we have  seen here in 25 years. The attached photo shows a red barricade that was placed by a citizen whose vehicle nearly went off the road due to hitting deep 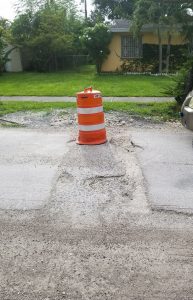 Five blocks of main artery SW 99th Avenue have for weeks been ravaged by a poorly filled trench marked with only sporadic, badly placed warning cones. Even at normal speeds, this roadway is in such terrible condition that it should be **CLOSED**. Speeders are regularly ripping down this travesty at 40-50 mph, and someone is going to get killed!

About a block or so of what passes for final repaving is now finally evident on SW 168 Street and on 16700 block of SW 99th Avenue, but it is simply not going to be acceptable; the whole five blocks of SW 99th Avenue will need to be completely resurfaced.

If this nonsense is what our community is going to have to endure to be entitled to overdue sewer work, FORGET IT; keep the sewers the way they were and leave us the hell alone!